Our musings, pictures, stories, and other such things

Because this is our family blog and a lot of my updates are not really about my family, I have created a second blog here: http://smackingmyselfintheforehead.wordpress.com/wp-admin/edit.php

Conversations That Make Me Want to Smack Myself in the Forehead: Part 4

Me: I think this shirt is too small.

Ethan: Don’t worry about it. You’re not fat.

Me: I wasn’t saying I thought I was fat- I was saying it shrunk in the wash! Do you think I’m fat?!

Conversations That Make Me Want to Smack Myself in the Forehead: Part 3

This conversation took place over my request that Ethan wear a shirt during meal times.

Ethan: But I have to let my body breathe!

Me: It breathes at night.

Ethan: But it’s under covers.

Me: It breathes in the shower.

Ethan: But it’s under water.

Me: Women don’t ever get to let their bodies breathe, and we’re okay.

Ethan: No you’re not. That’s why you don’t live as long.

Me: What? Women live longer than men!

Ethan: But is that really living?

Why I shouldn’t ask my fiance for clothing advice.

Me: Ethan, does this shirt go with this jacket? I bought the shirt because I needed something for under the jacket.

Ethan: The shoulders are huge on your little body. I think it’s too big for you.

Me: No, I LIKE the jacket! I was asking you if the SHIRT goes with it!

Ethan: Oh! Well… no, I would have gone with orange.

Why We Should Avoid Celebrities

The following is a facebook wall exchange between Meagan and me.  It reminded me that my family should avoid celebrities.  Those star-struck moments just magnify our normal weirdness.

Meagan really shouldn’t be allowed around famous people anymore. Telling the lead singer Bradie had to leave the number one spot in line to go find a bathroom is not appropriate conversation. In other news, THE SCRIPT IS AMAZING!!!!!!

Me: Ha-that’s great. At least you didn’t tell one of your favorite authors that he was a liar*.

Meagan: At least you didn’t tell your hero** that you were going to throw up on him.

Me: Whatever. That was the best Christmas card our family ever sent.

*My sister Colleen met one of my favorite authors and got him to call me while I was at the grocery store. I told him he was lying about who he was. He was a good sport and signed a book for me with the line, “It’s really me!”

Before my update, I want to share a story. A few months ago, I started to notice brown spots on my shower sponge. Standing in the shower, I examined them closer and realized they were tiny brown bugs. Disgusted, I threw the sponge away. Ethan’s sponge didn’t seem to have any bugs on it, but I wasn’t going to take any chances, so I threw that one away, too. I replaced the sponges, but they were back a few days later! I tore threw the house washing bedding and examing the apartment for these bugs, but I still only noticed them on the shower sponges.

A few days after Lasik, I examined them again. It turns out those “bugs” were the exfoliating beads from my brown sugar shower gel. I had never been able to see properly in the shower before because I couldn’t wear my glasses in the shower!

That story reminds me why Lasik was the right choice for me. However, one month after my surgery things still aren’t perfect. My left eye, which was almost 20/20 before, is about 20/25 now. Eyes can fluctuate for one to three months after surgery, so I guess I was having a bad left eye day when I went in. My hope is that when everything evens out, it’s back to 20/20.

My night vision still leaves something to be desired, too. It is better than it was, but I still get halos and glares off cars, and it’s harder than before to distinguish objects in the dark. I’m still not driving to unfamiliar places at night; I probably could, but I feel safer sticking to the places I know.

The only other annoyance is dryness. The dryness was a lot better about two weeks after the surgery, but then the autumn weather kicked in. It’s very controllable with eye drops about every hour or two, but it would have been nice to have the surgery farther away from winter so I didn’t have to deal with it.

Anyway, I’m still happy with the surgery but excited for my vision to even out and the night driving to get better.  I’m also beginning to suspect I’m not going to develop the ability to shoot lasers from my eyes.

1 month after Lasik (the brown spot has always been there)

Conversations That Make Me Want to Smack Myself in the Forehead: Part 1

This one comes from last summer.

Marcus: Since we’re twins, half of what I say to you will be done telepathically anyway.

Me: We never really tried out the whole “telepathic communication” thing. Do you think we can do it?

Marcus: Tell you what. When we’re at the cottage, I’ll blindfold you in the yard and spin you around and around and around. Then I’ll stop you and have you sprint blindfolded toward the cliff. In my mind I’ll yell at you before you hit the edge. If you stop, we can communicate in our heads. If I’m wrong: death.

Me: Well, it has been a long time since we’ve used our twin shenanigans to scare the crap out of Mom and Dad…

Marcus: And maybe instead of sprinting, you can skip and leap toward the cliff, for fun.

These are the statuses of my life, Part 1

Angela decides to wear my mascara... on her cheeks and in her hair.

As you’ve read above, I am the mother of three children and live an interesting life.  I have a wonderful husband and three fabulous children that I am proud of and who make me happy.  That being said, I sometimes feel like my life is a three ring circus in which I am the ringleader, the tightrope walker and the unfortunate soul who has to clean up the elephant poop.  My husband and children are the clowns and, of course, the elephants!

You can learn a lot about my life simply through my Facebook statuses over the past year and a half and as you will quickly learn, my youngest, Angie, can be my biggest challenge some days as a mother.  So, here is a small glimpse into my life.

Maureen was picking out shampoo in the shampoo aisle when she looked up to see her 2 year old with a bottle conditioner that she had plucked off the shelf… conditioner all over her face, hands and hair! What a lovely site.

Maureen thought her darling daughter was going down to sleep for her nap when she came out of her room to say “Poop in there, Mom.” Instead of sleeping, she was taking the poop from her diaper and putting it in the Barbie train along with her other toys! Bleccch!

Maureen is glad, for once, that it’s not a hot & humid day because Angela decided to dump an entire carton of half & half on the living room carpet…. and dance in it!

Maureen was driving down the street when a pop can rolled under her seat and then rolled back out – twisting and spraying everywhere and everyone… while I was DRIVING!! I had to pull over and let the rest of the can spray out the window before I went on my way. Abby says: “Mom – why did you do that?” Nick says: “That was so AWESOME!!!!”

Maureen had this sentence come out of her mouth tonight: “Well, don’t put your hands in there if you don’t want them to get stuck there.

“Maureen is wondering why there are bite marks in the soap on the bathroom sink??

Maureen just had the CRAP scared out of her by her 2 year old! Poor girl, she scared me so bad that I screamed at the top of my lungs and scared her right back. She has finally stopped crying and I’m just waiting for my heart to start beating again.

Moments That Make Me Want to Smack Myself in The Forehead: Part 2 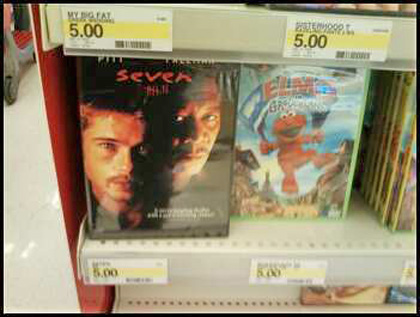 I’d like to meet the employee who chose to place Seven next to Elmo in Grouchland.

Moments That Make Me Want to Smack Myself in The Forehead: Part 1

You are currently browsing the Uncategorized category at Unusual Brood.